Just tutoring and studying at the moment occupies my evenings but means that my days are free to experiment and try out new things. This has led to many interesting paths and connections opening up to me.
One of the things I got involved with was the Mardi Gras parade. Bhu was setting up an organisation to support gay doctors in Australia called GLADD (Gay and Lesbian Association of Doctors and Dentists) and signed up to create the first doctor’s float in the parade. At the time I knew Bhu vaguely through a friend and volunteered my time to help out in the workshop.
We decided to create a big stethoscope and make letters to carry that spelt out DOCTORS. At Reverse Garbage in Marrickville we found heaps of pipes, a huge lampshade and some bases of table lamps that we put together to create the stethoscope.

The letters we cut out of foam, painted and glittered, then stuck them on sticks and looped fairy lights around them. They looked amazing!

A fashion school designed and made some scrub tops with logos and sparkly red crosses on for us and Bhu and his friends sewed small fairy lights into the strips of the rainbow flag, which took ages to do but looked awesome.

We also got some great posters and banners that we plastered over the sides of the truck.
A dance routine was worked out and practised to “Europhia” a track I had actually never heard before and will now always bring a smile to my face reminding me of that day.
Even though it rained and the truck took much longer to set up than anticipated, everyone got into the spirit (and the spirits of the free bar courtesy of the marriage equality float!) and celebrated the parade in style. It was funny that a group of doctors all decided to dress as nurses (“don’t want to wear doctors’ outfits, we wear them every day!”) and my nurse friend decided to become a patient for the day! I (who failed to inflate recuss Annie in my work’s first aid course!) was dressed as a doctor. I perched in the middle on a hospital bed with 3 others, which was so much fun, even when the bed clunked and felt like it was going to fly off the truck several times, we just laughed and held on to each other! The song was a big hit with the crowd and was full of energy so kept us dancing around like crazy.

The parade seemed to go so quickly and suddenly we had to unpack everything. We carried the letters back to Bhu’s house and went for food-we had survived simply on adrenaline until then, so a curry was suddenly the perfect fit.

The best thing about the whole experience has to be the friends I made during it, I didn’t really know any of the people involved before I volunteered. Everyone I met was so friendly and considerate to each other, I am sure we will continue to be good friends and I look forward to many more GLADD meet ups in the future.
I just heard that we won a gold award for a “show stopping float”! Great news! Even though I am not a doctor, or gay, I think it was a float with an important message. It highlighted the fact that gay people are not a separate ‘section’ of society but are in every part of our community, including looking after our health. The slogan along the side of our truck “caring for you 365 days a year” spelt that out well I thought.

Well done Bhu for the vision and the investment (of physical and mental energy as well as financial), it was a special parade, full of great memories.

Lots of others helped to make it special and I’m sure if I tried to list them all I woul forget someone, but it is definately worth mentioning Ashley, who was the ultimate right hand man to Bhu, always organised and took everything in his capable stride.

Also my “co-creative director” Travis, who not only had great ideas and artistic talent, but the practical skills to carry it all out too! (I just followed his direction) 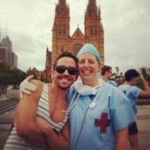