I’m lucky that my Mum loves Australia and so likes to come and visit. And equally lucky that we get on so well and love travelling together!
This time she came in July though, when it’s unpleasantly cold in Sydney. It’s not cold like a british winter, but the houses here aren’t designed to keep warmth in so it’s chilly both in and out. As I’ve said before in posts, I like to get away to the heat at this time of year.
Mum really loves Sydney though, and has relatives here, so we compromised and decided to spend half of her trip up in northern WA and half in Sydney.
That gave us 10 days around Broome. A place where neither of us have travelled to before. Mum is an easy going travel buddy and we have stayed in a wide range of accomodation before, but this time we made it a bit more comfortable. Seeing as I had just missed an important milestone birthday of hers and needed a break from school, this was good timing.
We started with a flight in a small plane to the Bungle Bungles. If we had more time we should have driven to a closer point first as it was quite far to go in such a small plane. What an experience and incredible views though!

We travelled in the plane with a 90 year old guy named Burt, who was lovely. When we landed we were met by a tour guide and some other tourists and we walked around some of the bungles. Burt was hesitant and felt like he would hold us up, but we insisted he walked round with us, and we took pictures for him (because he has never owned a camera, but admitted that he would like to have proof to show his relatives where he was!). Mum was borrowing my hiking shoes and unfortunately after looking after me for so well on so many journeys they fell apart on her!! So it was good that we took it nice and slowly. As always with the Australian outback the vivid colours amazed me, these formations also had the added stripy layers for even more interest and contrast. The guide we had was great too, really enthusiastic and keen that we enjoyed ourselves. Having quit a successful banking job after her kids had grown up, she was loving the freedom of tour guiding. Quite an inspirational women.

The next part of our holiday was pure relaxation and indulgence. We stayed in a beautiful b and b, with a pool and no children allowed. We had massages and facials and just enjoyed relaxing and reading in the sun.
The town of Broome was quite easy to potter around in, we found out a bit about their history of pearl diving and also about how they had to segregate the Japanese population during world war 2, but many had been born and bred in Broome so the locals would go to the camps and make sure they were ok.

Feeling refreshed and revitalised after a few days of this, we hired a four wheel drive and set off further north on the dirt roads to cape leveque. Stopped at a small village on the way for ice creams and to look at their lovely church with an altar covered with shells. We stayed in tents, which actually had beds and a small beside table in, so were very comfortable-more “glamping” than camping. The days consisted of getting up early to hike to the easterly point for sunrise, then reading/relaxing/napping/snacking until another short hike west to see the sunset. We got quite competitive of our picture taking skills and Mum stills feels robbed because I used the “vivid” setting on my camera and so mine were all superior 🙂 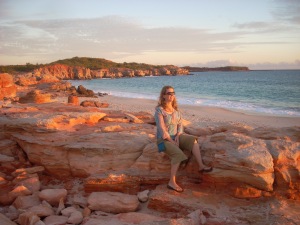 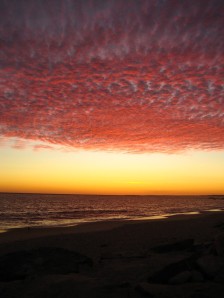 When we got back from the cape, we stayed in a resort, which I had specially booked as a luxury treat after camping, not realising that we would have being living the life of riley for all the other parts of the trip too! Again more relaxing by the pool, reading and watching a great sunset from cable beach. It’s a tough life! We kept running into a couple who made us feel really inactive as each time we met they had packed in at least half a dozen more activities and in comparison we just had tales of relaxation and sunsets. We didn’t even get motivated to do a camel ride, although we spend ages trying to get good photos of them. Credit to Mum for this sunset one below:

It felt like we had spent ages on holiday because of the different locations we stayed at, and nothing felt rushed. I was glad to have done this sort of luxury holiday with my mum and it was particulary nice that we were both seeing this area for the first time.