Well, I have now made my way down the west side of the South island, along the mountain range. First stop was Nelson in a beautiful town by the Abel Tasman National park. Got a water taxi into the park and went for a walk-beautiful scenery, got to a secluded beach and sunbathed for a while, before getting another water taxi back. It was such a chilled out and lovely day, spoilt only slightly at the end by a very grumpy bus driver (the only unfriendly kiwi we’ve met so far), who chucked us off the bus, ranting and raving, because it was full-even though we had just bought tickets for it!! Oh well, soon forgot about it once we’d got back to the great hostel-it’s the best hostel i’ve been in so far-free fluffy white towels and a power shower-i’m easily pleased! And they served a great roast dinner with free wine. 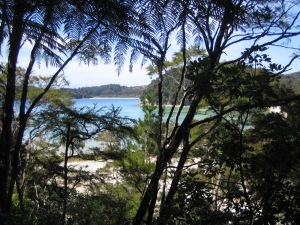 Stopped in a few little towns down the west coast, the South island has only a third of the population of the north so the towns here are all pretty small. Saw the “pancake rocks”, so called because of the thin layers. An overnight stop was simply a pub in the middle of nowhere, where we had a fancy dress party, got very drunk and went off into the woods to find the glow worms!

But the best experience so far has to be Franz Josef. Arrived in bad weather, to find that the glacier had slid, breaking a bridge and some of the tracks, so noone had been able to go hiking. Crossed our fingers and did a gentle sun dance (didn’t want to stomp too hard and dislodge more of the glacier!) and it worked! The next day woke up to blue sky, sun and the sound of helicopters! I had booked a “heli-hike”, where you get taken right up the glacier by helicopter and then get to clamber around on the ice, through caves, up big mounds and in crevices. It was just amazing, i couldn’t stop looking around in wonder-the ice had lots of patches of different blues, lots of different shapes, and it really was stunning-took loads of photos. We had to wear “ice talons” to dig into the ice, and our guide had a pick axe to make some footholds for us. The flight in the helicopter gave us some pretty good views too. I was so glad that we were able to do it-the weather was perfect. 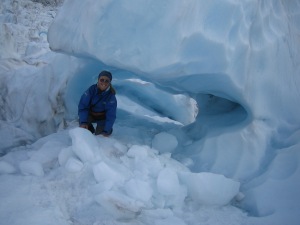 The next day we travelled to Wanaka. The driver called it “National Geographic day” and it really was-we stopped loads of times along the way to take pictures of the beautiful mountains, waterfalls, rivers, lakes-a real feast for the eyes! I’ve stopped off here in Wanaka for a bit, it’s a really pretty place by a big lake. I’ve got a bit of a cold, so i’m hoping to relax a bit in the sun and shake it off, ready for the action packed adventures in Queenstown-our next stop. 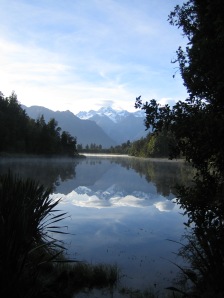