One of the most peaceful countries I’ve been to so far. Even speaking, people seem to whisper.

I remember straight afterwards feeling a bit disappointed with myself that I had done this part of the trip with an organised tour group, I felt that I could have easily organised and travelled here on my own at a better pace, as several others I met along the way. I felt so wretchedly ill on the border that I would have enjoyed having a couple more days to recover and take my time on this part of the journey. Also, although the other travellers were nice, they were in pairs already so I felt a bit of a loner but without the easy option of just chatting to others enroute. On the other hand, it was nice to have people looking after me when I was ill and the guides were lovely.

This email was written while I was still in Laos, after the trekking in the Thai countryside. 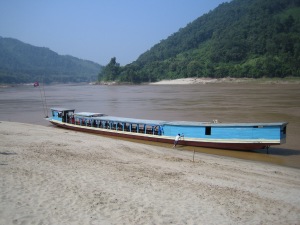 “After a long drive north in a pick up truck, we arrived at the border to Laos on the Mekong river. I was really sick all night and really didn’t feel like travelling any more, but I take back my curses against Sammy as he looked after me and got me feeling well enough to get on the boat. Fortunately i was able to lie down in the shade at the back of the boat for
most of the 6 hour journey to Pak Beng. It is quite surprising how basic the standard of life is here, even though we’ve seen tribal villages in Thailand, these seem worse off because they have something but not enough. For example, while we were there this village had electricity between 5.30pm and 10pm and it was a big deal-the television came out in the guesthouse and people came around to watch it-even though they just seem to flick through news and wildlife programmes! The next day, the next village along will get the priviledge. Our local guide took us around and we were a curiousity for the kids, despite being a main stopover point for tourist boats, not many of them seem to go into the town.  The next day was another 7 hour boat ride, stopping at another little village and some caves. And also an impromptu stop because the captain saw that a fisherman had caught a big fish and he wanted to buy it!  We are now in Luang Prabang, and after steak and chips last night I am feeling a lot better! The night market here is much nicer than the ones we encountered in Thailand, a they are not pushy at all, they just smile and say “sabay-dee” (hello) quietly and smile. I bought a t-shirt and the haggling was quite different too-i got treated to a little story about how much it cost him and that he must also pay for a tuk-tuk back home, but he could do me a good deal because it looked so nice on me! All the time smiling-and in the end he did have change and stuck to the amount we’d agreed on!  Everyone here is so quiet and laidback and it feels really safe-even though it’s pitch black after sunset-must remember to take my torch out tonight! Will try out some of the bars tonight, there seems to be a lot of backpackers here, so hopefully I’ll meet a few other people too. Might have to do a big shop at the night market too, depending on how my clothes come back from the laundry!  Have bought a ticket for the ‘ballet’ tonight and then we’re going to eat some traditional Lao food with our guide. 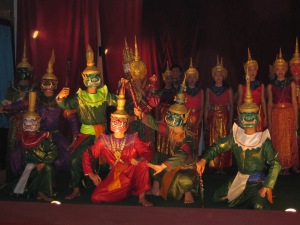